Early morning sun on the drive up the Baja - breathtaking beauty!

There are world-class performing and visual arts here in the Hamptons. The proximity to New York City draws extraordinary talent and while we’re here, we try to take in as much as we possibly can. We’d be crazy not to take full advantage of it.

In June of last year, we attended an excellent performance of Arthur Miller’s production of All My Sons at Guild Hall in East Hampton. The production featured a really strong cast and starred Hamptons local Alec Baldwin (30 Rock) and Laurie Metcalf (The Big Bang Theory and Roseanne). A difficult subject, the tragic play was about a successful businessman whose unethical practices during World War II resulted in aircraft equipment failure that hurt and killed air force personnel and ultimately destroyed his and his former partner’s life and family. It was flawlessly acted but the subject matter made it difficult to watch. It was, in a brief description, theatre at its best.

Last week, we attended the opening night, world-premiere performance of The Forgotten Woman at the Bay Street Theatre in Sag Harbor. This play is about a tremendously talented opera singer who is right at the cusp of fame and success in the opera world. As she steps into her own power, she must address core personal issues including her weight, conflict between motherhood and career, self-doubt and sexuality. Every performance was strong, but we felt that Ashlie Atkinson in the role of the opera singer, Margaret, was outstanding.

Last night, we attended the opening performance of The Underpants, adapted by Steve Martin from a 1910 German farce, at Guild Hall in East Hampton. We went with our actor, director and producer friend, Ian, and his friend, Birgit, from Cologne, Germany. Unlike the last two plays that we’ve seen, this was a wild satire, chock-full of sexual innuendo with lots of verbal and physical comedy. Ron and I thought the play was fun, was well-performed by the actors, and felt that we’d had a fun night of entertainment. I wouldn’t see it again, nor highly recommend it to others, but we felt it was definitely an enjoyable performance. 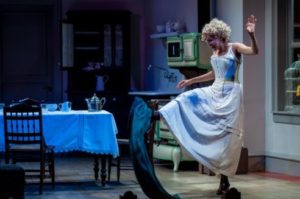 We’re looking forward to seeing whatever production is next and hope we’re able to attend!

We stopped at two classic southern institutions to see what they were all about. One was Cracker Barrel as we’d seen their signs everywhere in the southeastern states and we stopped at a location somewhere in South Carolina. We weren’t terribly hungry, but thought that a biscuit and coffee would hit the spot. Our waitress was lovely, with her soft, Southern accent and going out of her way to fill our order. They don’t normally sell their baking powder biscuits separately , but she checked with the kitchen and came back with a bag of a half-dozen biscuits, two corn meal muffins (a bonus!), butter, cream cheese, apple butter, blackberry preserves and honey. They were delicious, but it was the quality of service that will always endear our Cracker Barrel experience to us. 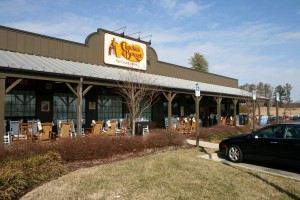 Our other occurence was memorable, but in a completely different way. We stopped at a Waffle House location, another restaurant chain that appears all over the south, because Ron has a soft spot for waffles and I was determined to try some cheese grits. We stopped at a Waffle House located in Lafayette, Louisiana, and the comedy that we experienced far surpassed the quality of the food we were served. The whole scene was like something out of a Candid Camera episode (for those readers old enough to remember that show!) – I kept looking around for the camera! There were five women working that morning and we gathered that at least two of them were related – mother and daughter, actually. They couldn’t take orders, didn’t provide the utensils needed to eat our breakfasts, nothing offered or served with Ron’s coffee, no syrup brought for Ron’s waffles, no one checked to see if everything was okay, the women were arguing in front of the customers, one of them insisted they weren’t “uppity” like other Waffle House locations, the cook couldn’t get the orders straight, one woman insisted on slopping water on the floor by the grill and mopping despite safety objections from the cook and other workers, etc. Ron was teasing these women mercilessly and they had no idea that he was having fun with them. At one point, Ron asked our waitress if she was the slightest bit curious about whether or not he was enjoying his breakfast (since she hadn’t checked with him). Even with that prompting, she was completely oblivious and insisted that everyone likes the breakfasts at Waffle House. The whole experience was surreal! The grits, by the way, were underwhelming – basically cream of wheat-like cornmeal with lots of butter and, because I’d ordered cheese grits, my serving was topped with a slice of processed cheese. I couldn’t believe it. I’m sure there are better grits (and waffles) to be had, but we wouldn’t have missed this comedy show for the world!

Early morning sun on the drive up the Baja - breathtaking beauty!