Ron and I obviously travel great distances and cover thousands of miles on the highways and bi-ways of North America. We strive to stay current by watching local and national news on television, picking up local papers, and the New York Times (the paper whenever possible or the digital version when the paper isn’t available). In the car, we enjoy listening to NPR (National Public Radio) stations across the US (and CBC when travelling across Canada last year), despite our bad luck of travelling during public fundraising drives.

Finding NPR stations can be a challenge, but we were alarmed in the southern states to realize that almost ALL other radio stations are religiously based. Talk about finding Jesus – he’s on virtually every radio station!

We couldn’t help but laugh at one talk show that was negating the science behind a recent archeological discovery and insisting that it was all a “hoax”. Unbelievable!

The most upsetting, however, is the sign on the back of the Covenant Transport trailers that reads “It’s not a choice, it’s a baby”. Both Ron and I are huge proponents of freedom of speech and diversity of opinion, but advertising such a politically and morally charged issue on a transport trailer or anywhere so public is completely inappropriate, in our viewpoints. 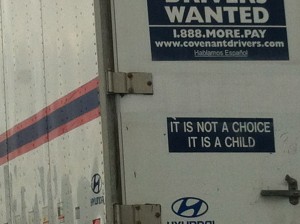 We all know someone who loves their spicy food.  Well, as it turns out, there is some science behind the love of hot flavors.  Capsaicin, the chemical that produces the heat in chiles and peppers, increases the release of feel-good endorphins when the spice hits the tongue, according to Dr. Paul Rozin, Department of Psychology at the University of Pennsylvania.  Endorphins are known for their ability to reduce stress, relieve depression, and significantly raise the spirits.  So, if you need an emotional lift, add some hot sauce or cayenne pepper to your next meal.