Our friend, Ian Harkins, is a brilliant actor, producer, director, and voiceover artist who trained at the Royal Academy of Dramatic Arts in London and Cornell University. He’s been playing tennis with Ron since he was a very young lad, and until last night, we had never had a chance to see him perform. 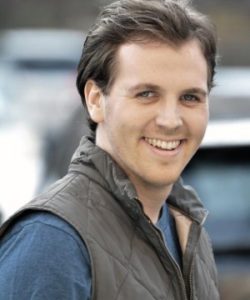 As Managing Director, one of three Founding Partners of Purpled Pheasant Productions, and one of the three actors to perform a comically abridged form of 37 Shakespearian plays at the Southampton Cultural Centre, we thoroughly enjoyed Ian’s performance, and that of his fellow actors, in this fun, fast-and-furious interpretation of The Complete Works of William Shakespeare (Abridged). This show first premiered at the Edinburgh Fringe Festival in 1987, became London’s second-longest-running comedy after a ten-year run, and has become one of the most frequently produced plays which has been performed in dozens of languages around the world.

It was very cool for us to watch Ian on stage. He is best known for his television series’ performances as Narrator of The Once and Future Nerd and as John Chamberlain in ABC’s Forever. He’s appeared in many plays throughout the US and Europe, including London’s West End, as well as in American Hustle, Boardwalk Empire, the Murdoch Mysteries, and The Knick (upcoming). His career is just starting to take flight and we will watch and follow his future success with great excitement and anticipation. Break a leg, Ian!

We’ve been going out so much lately that I haven’t cooked a great deal. Ron had a busy day of tennis yesterday and we wanted to stay in, relax, watch O.J.: Made in America, the new documentary about O.J. Simpson on ESPN, and prepare our own food for a change. I saw a recipe on the Food and Wine website that I wanted to try as we had a lot of spinach in the refrigerator to use: Asian Pork Noodles with Spinach. 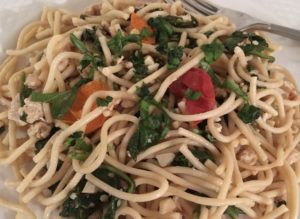 I wasn’t able to find ground pork at the local grocery store, so I decided to use ground turkey instead. The other changes that I made to this recipe were that I added 1 cup of halved cherry tomatoes when I added the spinach, about 2 tbsp. of sesame oil just before serving for extra flavour and to balance the acid, and garnished with both chopped cilantro and basil. To give the dish a little crunch, you could garnish with some chopped peanuts as well.

This was a very good dish (4 out of 5 stars), quick to prepare, nutritious and delicious. I would make it again, for sure.

As with all Thai food, this dish would pair well with a well-chilled, fruit-forward, lower-alcohol white wine like Riesling, Gewürztraminer, Viognier or Pinot Gris.

Earlier this week we drove to East Hampton to see a show. Aside from the movies that we watch on television in Cabo, we don’t get to theatres until we’re either on the road to or from the Hamptons or while we’re here in the Hamptons. The show we decided to see was Money Monster directed by Jodie Foster and starring George Clooney and Julia Roberts. 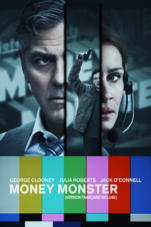 George Clooney has had a house on the corridor (between Cabo San Lucas and San José del Cabo) at a development called El Dorado for several years. The villa is on a compound shared by his best friend, Rande Gerber, and Rande’s beautiful wife, Cindy Crawford, and is known as Casamigos (which is the name of their tequila brand, by the way, and means “house of friends”). Both villas were recently sold in April of this year for $100 million to an unnamed Mexican billionaire (the infamous Carlos Slim, owner of Mexico’s cell and landline phone businesses, perhaps?). Ron has played tennis on the El Dorado courts next to George and his wife, Amal, and our good friend, Steve, was the head pro at this resort for many years and has played tennis and basketball numerous times with the star. We hope that they build in our area again as they have a reputation for their warmth, generosity and kindness when dealing with the local people and businesses (unlike many other celebrities).

In the movie, George Clooney plays a character named Lee Gates, a Wall Street guru who picks hot stocks as host of the television show Money Monster. Suddenly, during a live broadcast, disgruntled investor Kyle Budwell storms onto the set and takes Gates hostage. He tells Lee that he lost everything because of one of his stock tips. As Gates tries to plead with Kyle, he’s also using an earpiece to communicate with his longtime producer, Patty Fenn (played by Julia Roberts), in the control room. Together, they must figure out a way to defuse the situation and disarm the angry young man.

Hating Wall Street, greedy corporations and their corrupt executives have become popular themes in movies and this film certainly embraces all three. We found this film to be a bit predictable but definitely entertaining. I gave it 3 1/2 stars and Ron gave it 4 (out of 5).

Whenever we drive the Baja, we plan on overnighting in a town called Guerrero Negro. We strive to get there, not because it’s a great destination, but because of where it’s situated on the Baja and because of the food that is served in the restaurant at the Malarrimo Hotel. In business since 1974, they have funky rooms with very basic amenities; clean and functional, but the restaurant serves a few dishes that are worth going out of your way for. The waiters have been there forever and seem to be getting slower, heavier and more complacent with every visit, but the food is really delicious. Thankfully their cook hasn’t lost interest and consistently produces memorable meals.

Abalone is very rarely found on menus anywhere and is difficult and dangerous to dive for. We were lucky last night that they were serving fresh catch, so Ron opted for that dish (as he always does when it’s available). My usual go to is a delicious Seafood Soup that is made with a flavourful broth and loaded with fresh fish, scallops, lobster, shrimp, octopus, and clams, and served with a broiled slice of garlic bread, perfect for dunking in the broth. Enjoyed with a glass of northern Baja red wine, this is the perfect meal to wind up a long and arduous day of driving (we left Cabo at 9:30 in the morning and, aside from gas and pee stops, arrived in Guerrero Negro at 8:30 last night).

Guerrero Negro is a company town – the main industry is the salt plant and business owned by the Mitsubishi corporation of Japan. The other industry here is eco-tourism based around the whale migration. Like Santa Rosalia, my least-favourite town on the Baja drive, Guerrero Negro has lots of employment but seems to lack the soul and personality found in other places.

In the restaurant, we asked to see a wine list to see which northern Baja wines they were carrying. Unable to comprehend their poorly prepared listing, we ended up ordering a 2011 Santo Tomás Cabernet Sauvignon, based on the recommendation of the Australian couple we were visiting with, Lindal and Gerry, who were just finishing their meal and the last drops of wine from the bottle they had ordered. We poured them a glass from our bottle and shared some wonderful stories of the Baja, Australia, California, wine and tennis. Ah, the camaraderie of travellers – a grand and glorious thing.

You just never know what you might see in Cabo! Last Thursday, my friend, Katie, told me about the super yacht that I saw north east of the Cabo San Lucas Marina on my way to play tennis with her, Andrea and Fadwa at the Esperanza resort. Turns out that it was “Venus”, the 257 foot super yacht that Steve Jobs had commissioned and started building in 2008 and never got to see completed before his death in October of 2011. Designed by Philippe Starck’s design company, Libik, and built by Feadship in the Netherlands, the yacht is now owned by Steve Jobs’ widow, Laurene Powell Jobs.

Venus was, of course, the Roman goddess of love, beauty, sex, fertility, prosperity and desire. I’m not sure that this super yacht was appropriately named as this aluminum superstructure is far from beautiful (in my humble opinion!). She kind of reminds me of a floating Apple store – simple, functional, but certainly NOT sexy!