Almost ready to leave the Hamptons! This has been the most beautiful autumn weather and the leaves are only now starting to turn.

Once per year in the springtime, the residents of Santa Clara, California, have an opportunity to rid their homes of unwanted and unused items. These items are set at the curb and anyone and everyone is welcome to comb through to see if there’s anything there they want. It is, quite literally, a city-wide garage sale, but everything is free. One person’s junk is another person’s treasure, after all.

It’s quite a sight to see and absolutely amazing what people throw away. It literally evidences how material our society is and that we are all victims of overt consumerism. We all have too much “stuff” and purging and passing on to others who can use it is good for the soul. This program, called the Spring Clean-Up Pick-Up, was introduced in the late 1950s and has been operating very successfully ever since. 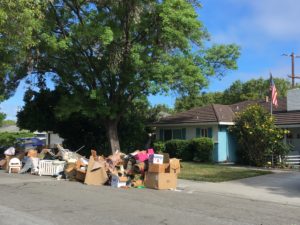 Year round, Santa Clara, set in the heart of Silicon Valley, provides curb-side trash, organic waste and blended recycling pick up and the citizens are huge supporters of their recycling program. Big bins are provided for each of the three types of waste and the citizens faithfully move them to the curb-side and back to their yards every week. Santa Clara also sweeps its streets once per week, owns its own utilities (except gas), and has the lowest taxes in the Valley – very impressive.

The city allows the once-per-year spring cleaning at a minimal cost of $3.00 per month for its citizens. The garbage trucks come by and pick up whatever is left after the treasure hunting is complete. It’s an amazing concept that could be replicated in cities and towns across the United States, Canada, and the rest of the world.

Almost ready to leave the Hamptons! This has been the most beautiful autumn weather and the leaves are only now starting to turn.