A photo of some of the beautiful flowers at one of our favourite restaurants here - literally garden to table. Mom loves it as well and it is always a delight to visit!

We’d been on the road for nine or so hours, daylight was gradually turning into twilight, and we were only 18 miles west of Ely, Nevada, our end destination for the day. Out of nowhere on the passenger side of the car bounded a large deer, hitting us in the centre of the grill, bouncing on the hood, then catapulting off the driver’s side roof into the ditch on the far side of the road. In the flash of a second, everything changed, as do so many occurrences in life.

We gradually rolled to a stop and off the road as much as we could with steam and smoke spewing out from under the hood and parts dropping on the highway behind us. The deer was quite dead we were sure, and we were so fortunate to not have been injured. We were both belted in, our air bags did NOT deploy (thank heavens), and the deer did NOT come through the windshield or the convertible top as he easily could have. All in all, we were very fortunate.

Our beautiful little car, however, didn’t fair so well. This little white 1999 BMW 3 Series convertible is Ron’s baby – just brought down last fall from a four year vacation in California. We’d just done a bunch of work on it, including work on the stereo system, and we were enjoying listening to some great music and, at the time of the accident, a superb audio book: The Boys in the Boat. 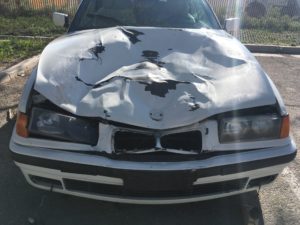 A passing local motorist stopped to ensure we weren’t injured and called the Highway Patrol for us. I was able to reach AAA and get a tow truck out to get us to take us back into Motel 6 in Ely. We talked about the various alternatives with the tow truck driver, John, and learned that Ely had no transportation services or car rental available. Our only option, he suggested, was to rent a U-Haul to get us to the next larger centre to pick up a car rental. Ely really is in the middle of nowhere.

We needed to get to New York within the week, so Ron got creative. He went down to the local Chrysler/Jeep dealership the next morning and did some fast negotiation on a 2006 Jeep Liberty. When he pulled up to the motel, I had to laugh because the spare tire cover on the back reads “Life is Good”. It really is. One more white vehicle to add to our fleet (we have two other white cars as well)! 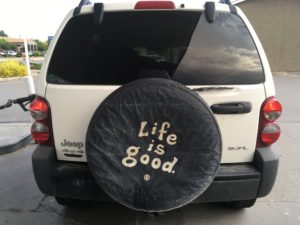 Our insurance company and the towing company made arrangements to have the BMW hauled and repaired in Elko, NV. We have no idea how we’ll get it, but I’m sure we can figure something out by the time the car is ready. We don’t plan to come back west until late October or early November, but I’m sure everything will work out as it always does. Life really is good.

A photo of some of the beautiful flowers at one of our favourite restaurants here - literally garden to table. Mom loves it as well and it is always a delight to visit!