I love to connect people, whether it’s through technology, introductions within my network, or with the greatest human connector of all – FOOD! I’m excited to announce that my three national best-selling cookbooks and the complete trilogy are now available on Amazon as Kindle books!

I had decided some time ago that I didn’t want to reprint the books when I ran out of inventory and it was a COVID inspiration that set things in motion to put them online. Although I wrote the books years ago, the recipes are as relevant today as they were then and I still love “cooking with fire”, “food with attitude, and sharing flavorful food with friends and family. Because I was working in the petroleum industry, all of my vacation and free time was spent doing writing, testing, research, marketing, promotion, media interviews (over 400 world-wide), radio (over 100) and television (over 50) appearances, book signings and demos (over 100) throughout North America and the globe.

I attribute our successful promotional exposure to my publicist and dear friend, Debbie Black, who did a brilliant job of constant promotion for the company, the books, and my product line.

It was a hectic time in my life, but I am extremely grateful for the experience and knowledge I gained, the people I had the pleasure of meeting, the places I was able to visit, but most of all, for gifting me with a love of entrepreneurship and risk-taking. Had I just stayed doing the Joint Venture work I love in Petroleum, my world would be much smaller and I never would have stretched myself as I did through my books and my business. I am truly grateful.

Here is the Amazon link to my books:

The simplest pleasures! I made a fruit salad yesterday with the freshest and best ingredients – many of which we grew ourselves or that we obtained at the Organic Market just half a block up the street on Wednesdays and Saturdays: papaya, cantaloupe, banana, blueberries, pineapple, pomegranate seeds, walnuts, orange juice and freshly desiccated coconut from one of our palm trees. I can’t tell you how much we appreciate the quality of the food we have access to, how amazing the flavors are and how happy we are to be home in Cabo again! 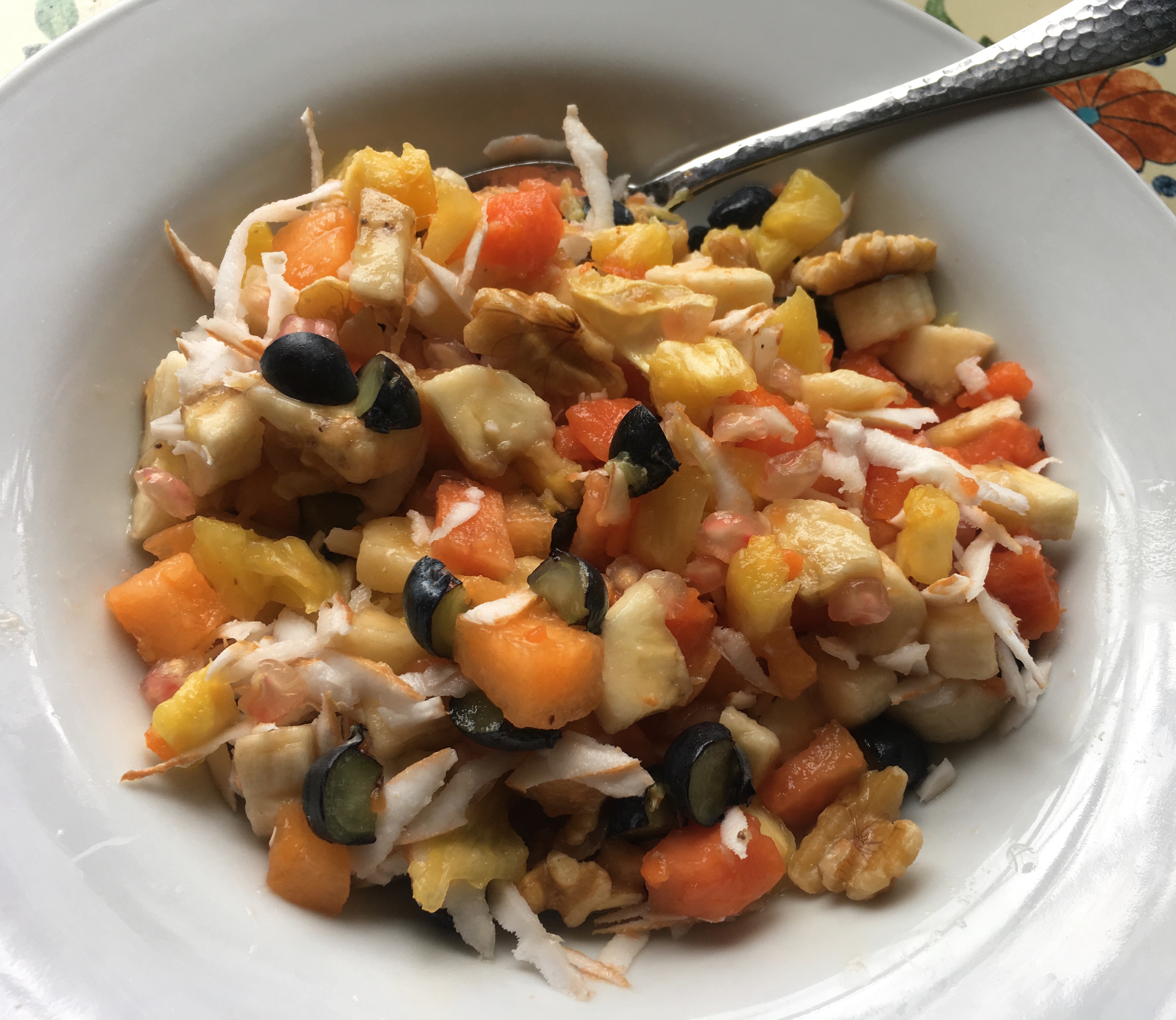 Fruit Salad at its freshest! 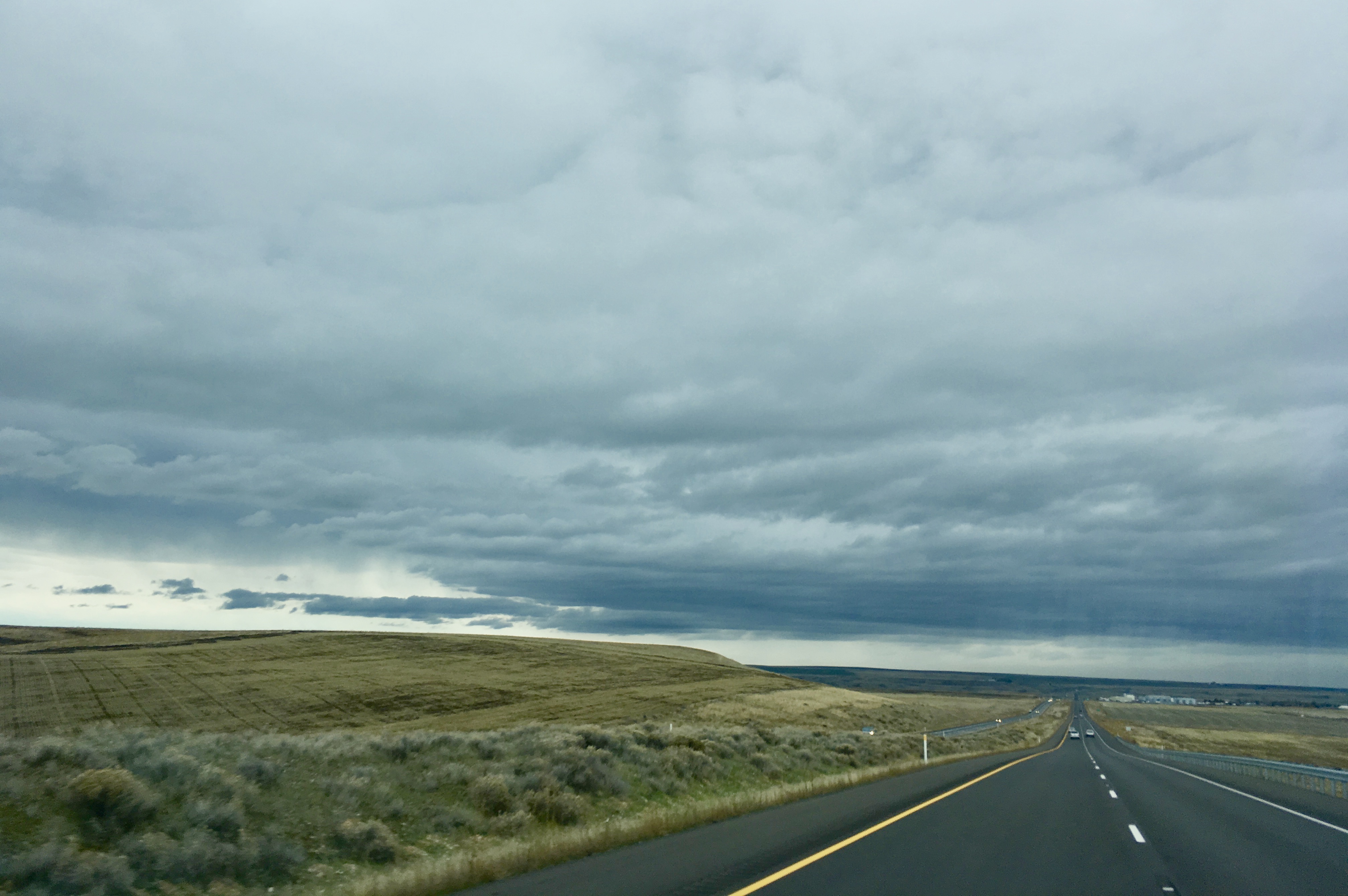 Endless prairie under a cushion of soft cloud.

We drove from Missoula, Montana yesterday under a blanket of cloudy sky and arrived in Walla Walla, Washington late afternoon in a deluge of rain. We checked in to our hotel and immediately made our way to the downtown area to see what was happening and to get a “lay of the land”. 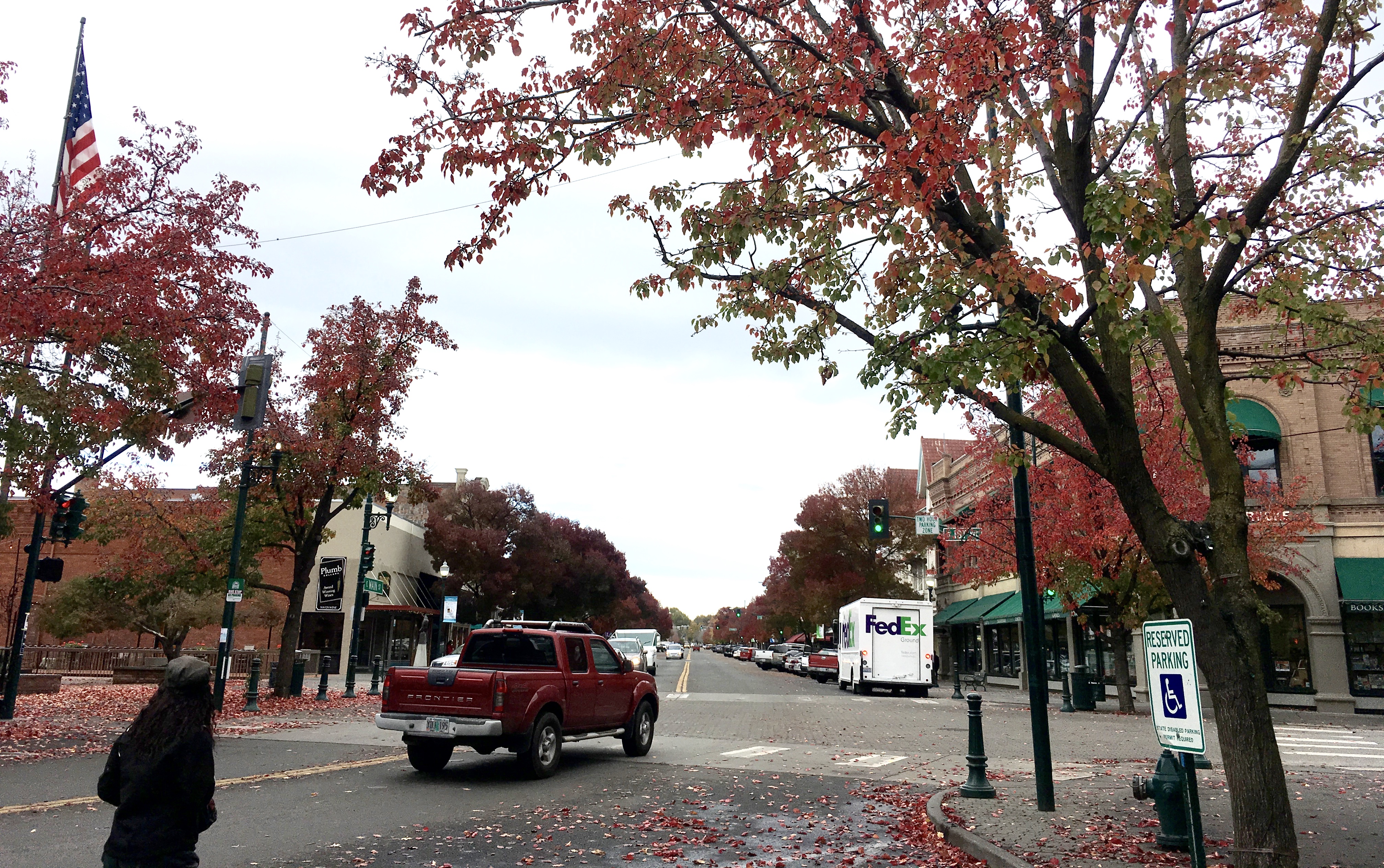 It was incredibly cold walking downtown in the wind and the rain and we found refuge at the Fort Walla Walla Cellars Tasting Room. Our host, Terry, poured us a sample of their 2010 Merlot, followed by a 2010 Cabernet Sauvignon.  Both were complex and delicious. Terry and his friend, Pat, then treated us to a glass of the 2007 Merlot. Merlot is not our favourite varietal, but we really enjoyed both vintages poured for us. It was a delight to speak with Terry, Pat and Shelley about the area, wines, restaurants, etc. Ron teased Terry about working for the Walla Walla Chamber of Commerce as he said that, with the exception of perhaps one winery, each of the approximately 150 local wineries are making GREAT wine. Similarly, when we pressed him to recommend the town’s best restaurants, Terry told us that there are many wonderful chefs and places to eat in the area. We left with a bottle of each of the two varietals we tasted and a great feeling of having met and spent time with three new friends. 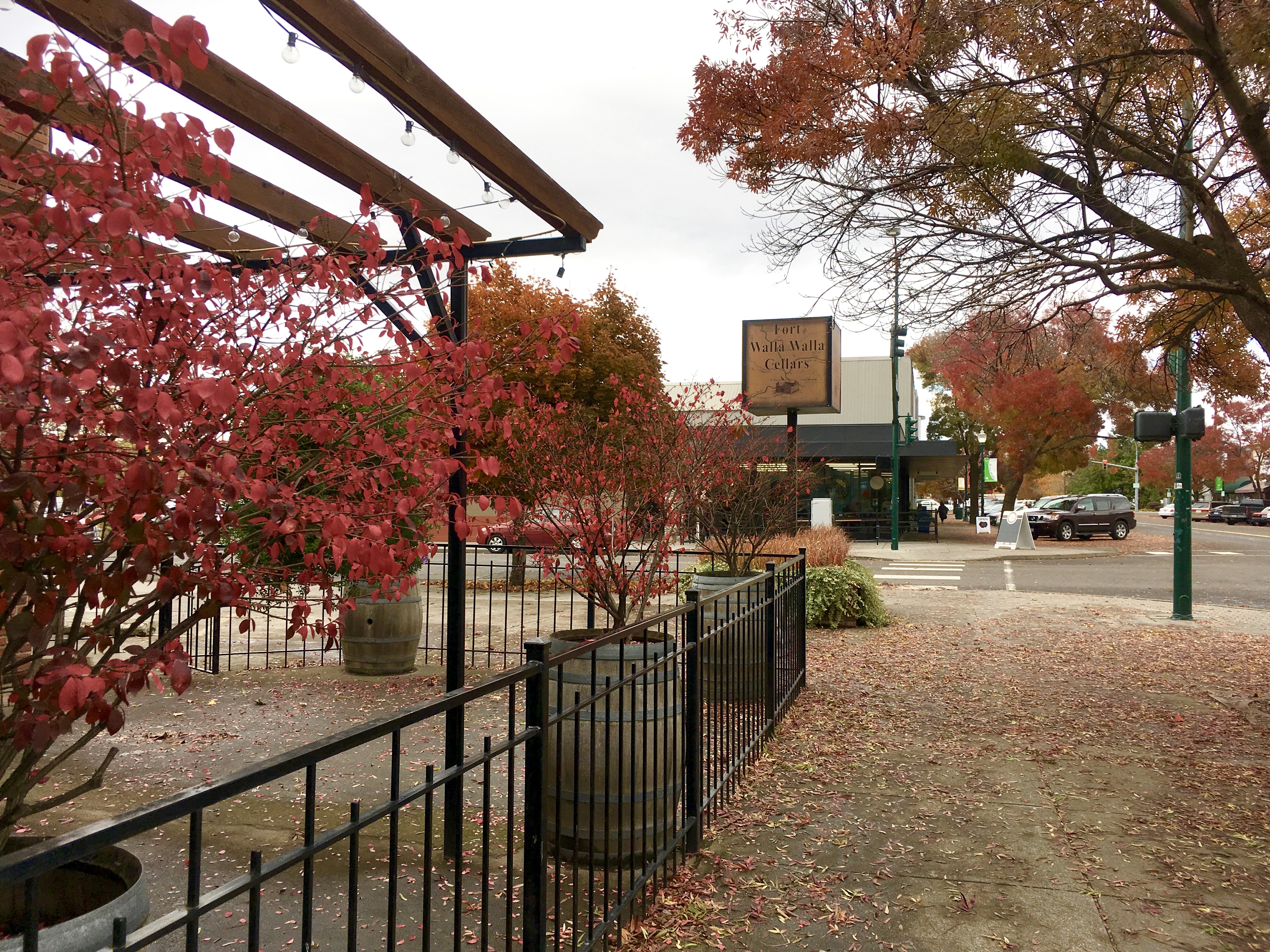 Fort Walla Walla Cellars is a boutique winery that produces about 2,000 cases of ultra-premium Cabernet Sauvignon, Merlot, Syrah, and Bordeaux blend wines from grapes produced exclusively from vineyards in the Walla Walla Valley.

We’ve wanted to tour the wine producing areas of Washington and Oregon for several years and we’re excited to finally be here. Pacific Northwest wines dominated the top of Wine Spectator magazine’s annual top 100 list in 2015, a compilation of the best wines in the world, according to the world’s largest and most influential wine publication. In 2015, wines from Washington and Oregon finished an astonishing 20 percent of the top 50, with five wines from each state. Very impressive. 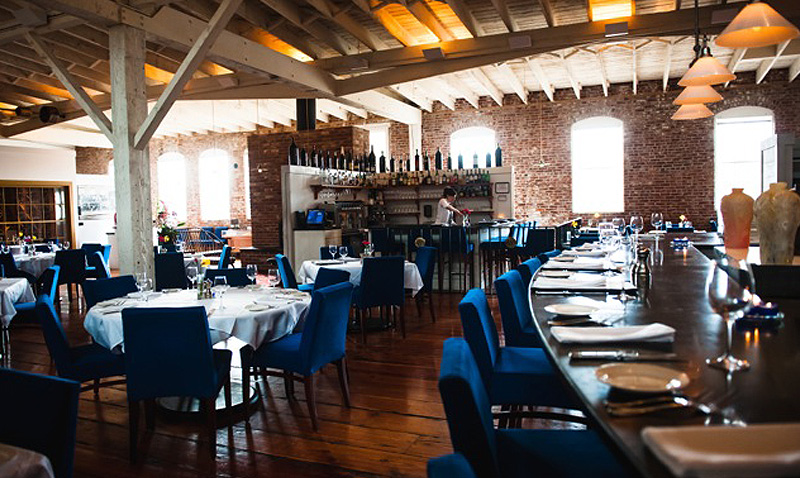 We did take Terry’s recommendation for one of his favorite restaurants, Whitehouse-Crawford. Dating back to 1880, the site of this restaurant was originally a planing mill and furniture company. Destroyed by fire in late 1903, it was rebuilt in brick and continued as a planing mill and furniture factory until it was sold to the City of Walla Walla in 1988. The current owner, Salvation! LLC, saved the site from being razed to build a motel and carefully restored it as a quality restaurant that celebrates food, wine and the history of the Walla Walla Valley. 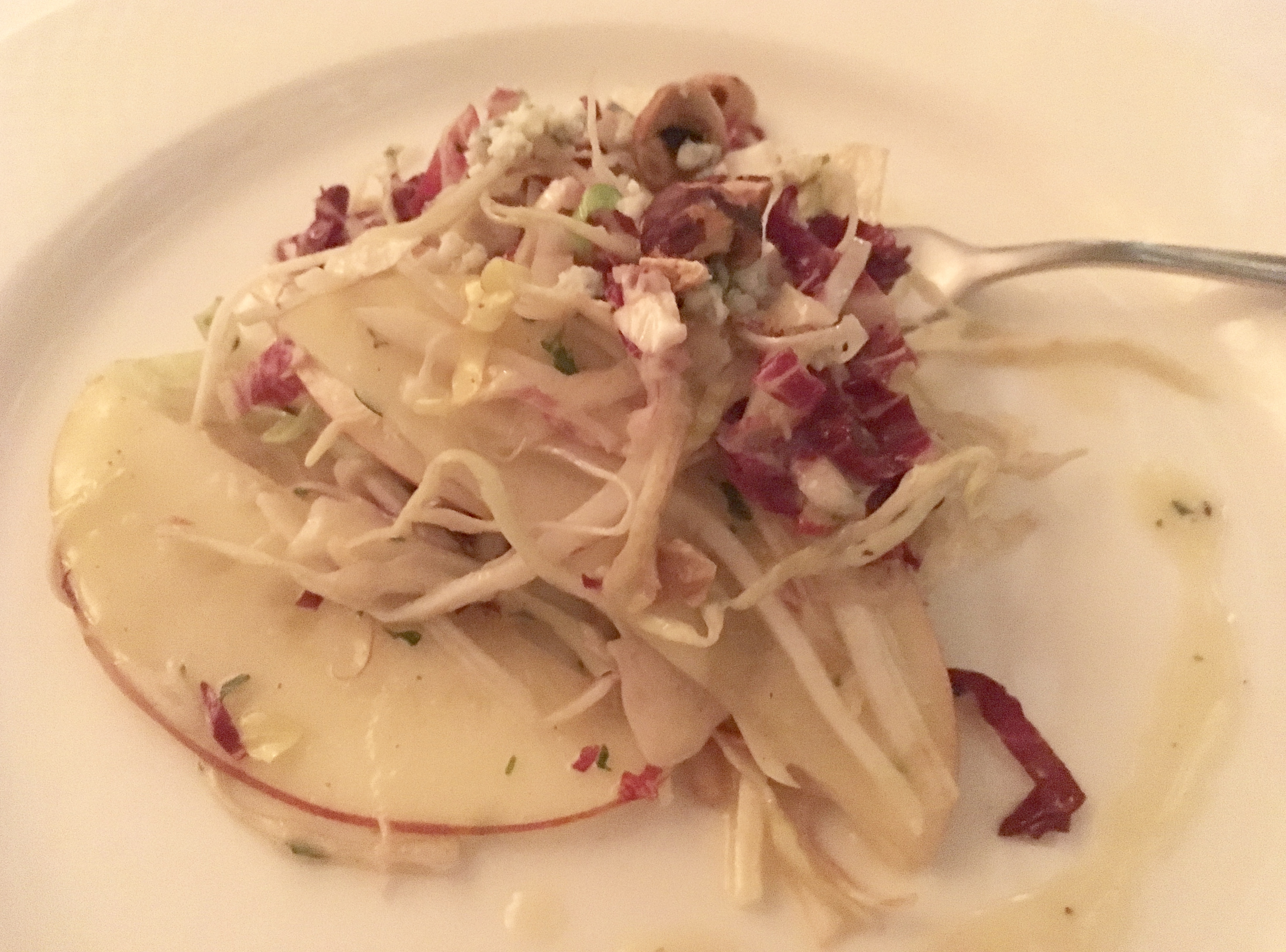 Our evening started with an order of Empanadas, perhaps the best either of us have ever had – light pastry and delicious filling. We then shared a Harvest Apple Salad, followed by the Pork Shoulder. 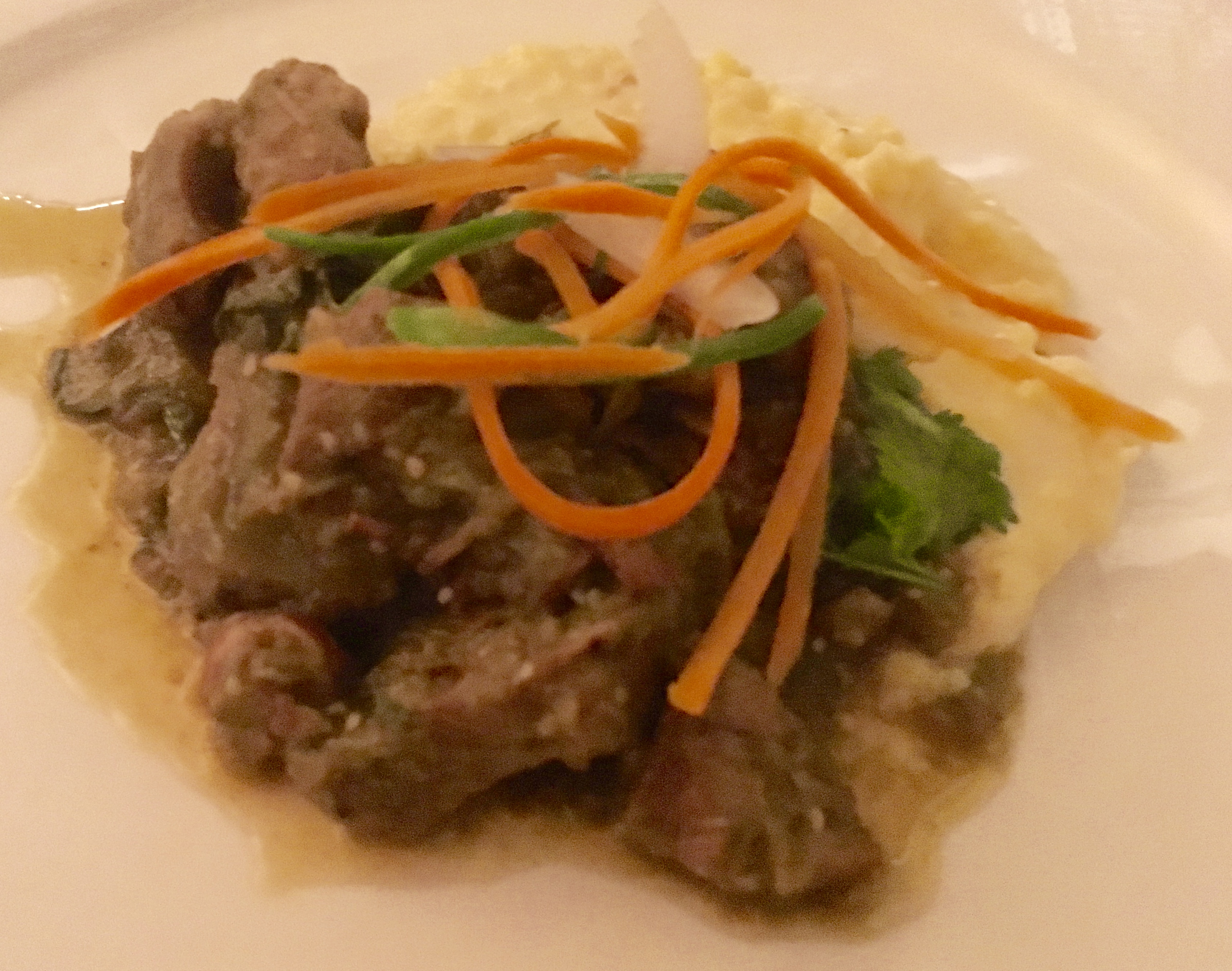 Robertson, our waiter, recommended the 2010 aMaurice Cellars Syrah, “Fred”, from the Walla Walla Valley and a 2012 Gramercy Cellars blend from the Columbia Valley, “The Third Man”. The Gramercy Cellars wine was spectacular and this vineyard produced the 2012 “Deuce Syrah” which was named #22 wine in the world by Wine Spectator in 2015. 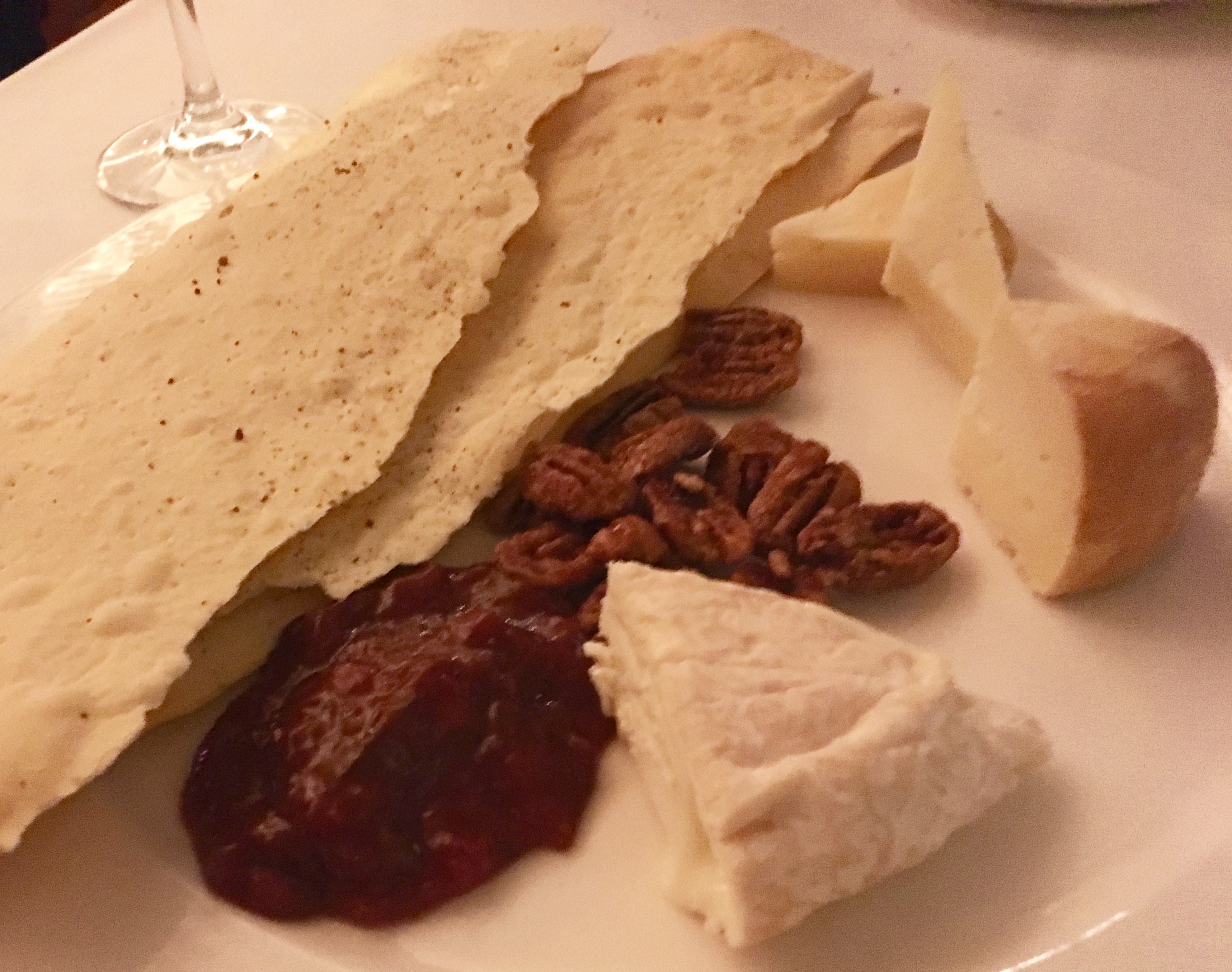 We finished our evening’s meal with a selection of Regional Cheeses (served with candied pecans, rhubarb chutney, and house made crackers) and a glass of Graham’s 20-Year Tawny Port. The service, the quality of the food, presentation and value were all excellent. 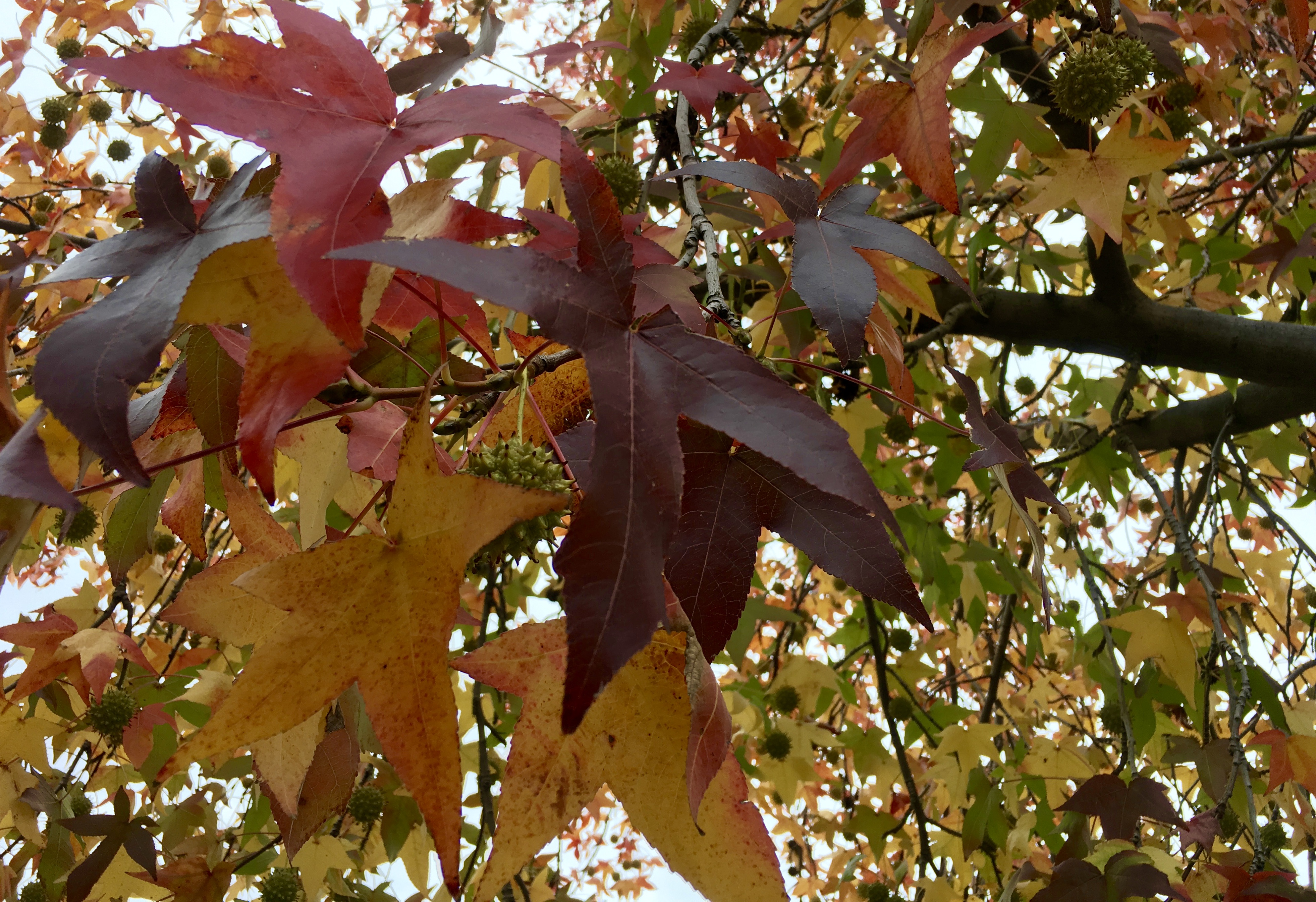 Our first night in Walla Walla was so positive that we decided to stay and play one more day. Let’s see what tomorrow brings! 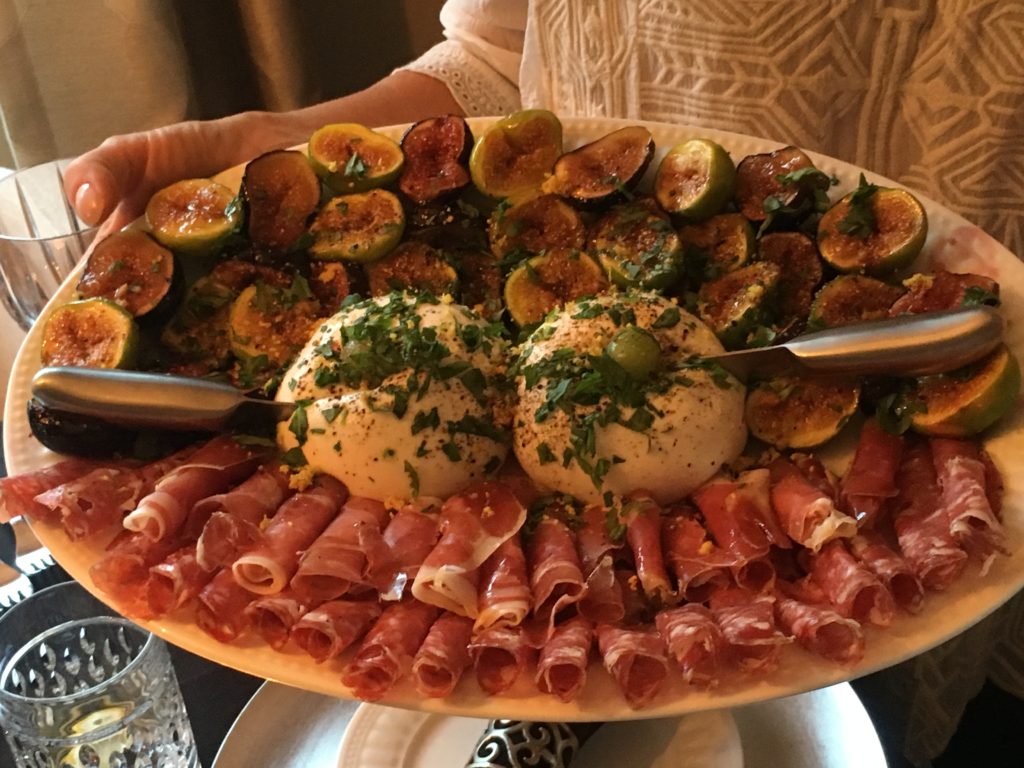 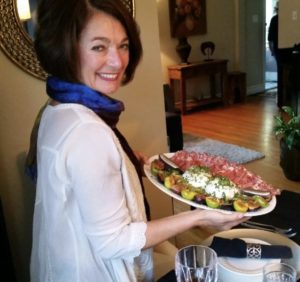 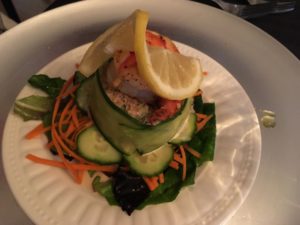 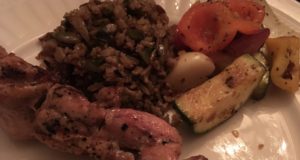 I LOVE cookbooks and had a massive collection of them in my past life. Wherever I traveled, it seems I picked up a new cookbook and got to explore the foods and flavors of the places beyond the trip itself. I also chose cookbooks of places I hadn’t yet traveled, but LOVED the cuisines, like India, Thailand, Africa, the Mediterranean, etc. I kept a precious few cookbooks when I purged my belongings last year and gifted all of the remainder to charity – paying the incredible gift of amazing food with others who might not otherwise get to experience travel and/or a variety of cuisines of the world.

One of the best ways to get to know a country, a culture and its people is through food and drink. Everything we do socially is centered around them: a first date with drinks and dinner perhaps, holiday meals shared with traditional recipes and loved ones, bringing food to a family to offer comfort and support during difficult times, a business meeting over coffee or lunch, etc. Nourishing our bodies and our souls with good quality food is one of the most important things we can do to honor ourselves and to show our love for others.

It takes time to plan, shop for and prepare good food. The investment is worth it and cooking is one the things I truly love to do. It’s meditative and creative. Like anything, learning the basics and the techniques are important to make the process more enjoyable. Some people have a natural flare and others have to work at it. Absolutely no one knows it all and there is always more to learn.

I worked really hard to write my three cookbooks and I loved doing them. Been there, done that and wrote three books! Now, I’m enjoying preparing food from other people’s recipes or creating things in our kitchen from my imagination (or from memory of foods we’ve enjoyed). This is an exciting new chapter in my life and I’m enjoying trying new recipes immensely.

I’m travelling lighter these days with very few cookbooks but a world of recipes at my fingertips with the internet and some fabulous food sites. One of my favorites is the Cooking App from the New York Times. It has become one of my main sources of inspiration and an absolute delight to cook recipes from. We LOVE Melissa Clark and her fun, fresh approach to food. Her recipes are delicious and videos capture her delightful personality.

As I prepare and play with new foods and recipes, I promise to share them with you. I’ll share great food and hopefully save you the process of finding the best recipes, food and flavors as I find them. I hope you enjoy this journey as much as I delight in sharing it!